We intend to establish a system that enables quick and accurate management and executive decision-making so that we may fulfill our social responsibilities and increase our corporate value. At the same time, we strive to improve corporate governance by strengthening management oversight functions; specifically, enabling directors to more closely supervise business performance as well as encouraging directors on the audit and supervisory committees to perform legal audits.

Corporate Governance System and Reasons for Adoption
The Company has adopted a system involving a board of directors and an audit and supervisory committee in the belief that corporate governance starts with informed judgments made by directors elected at the general meeting of shareholders who are familiar with the company’s business. The directors are engaged in mutual oversight and verification of the company’s business execution. 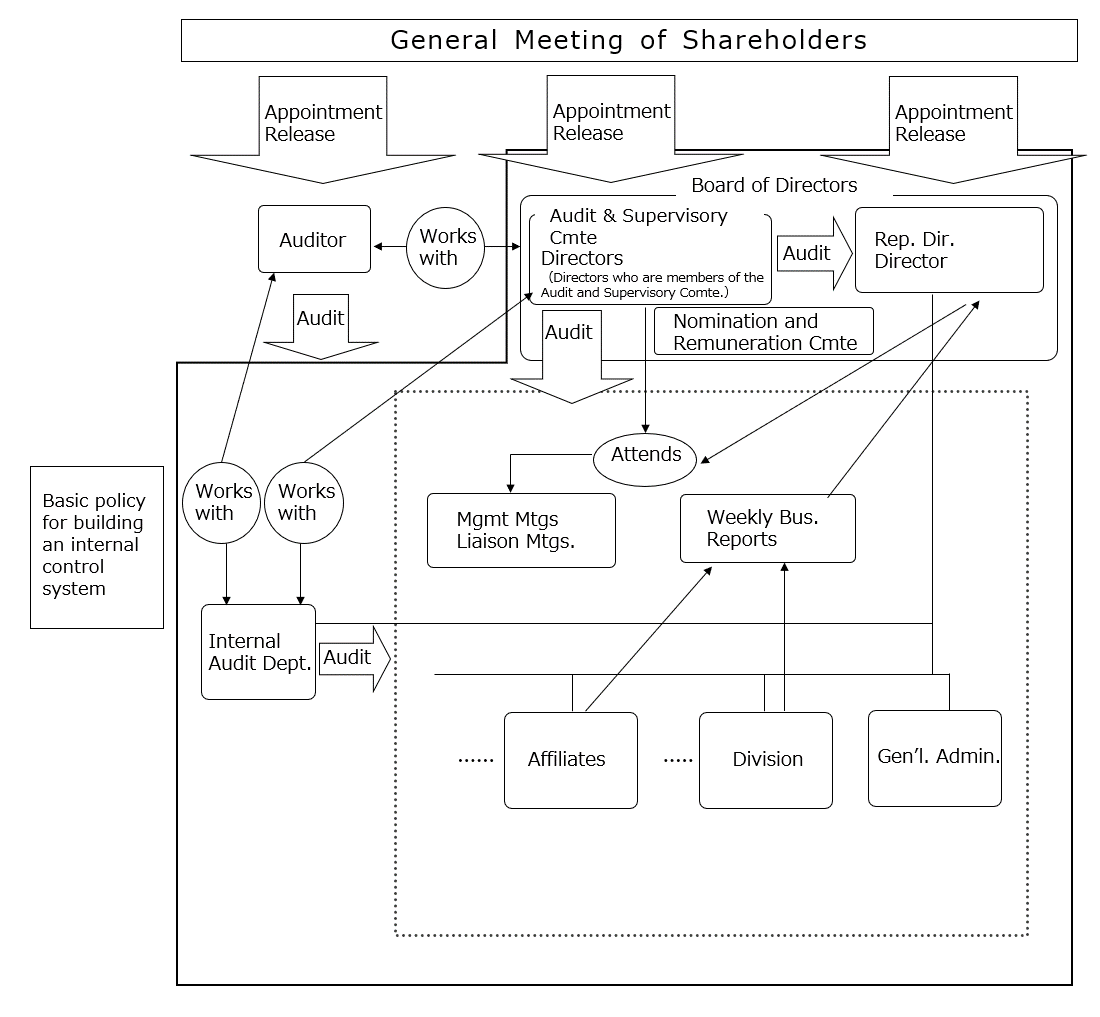 Institutions and Systems
The resolution adopted at the regular general meeting of shareholders held on March 25, 2016, called for a transition to an audit and supervisory committee. The company transitioned from a company with a board of auditors to a company with an audit and supervisory board. The intent of this transition was to further strengthen the corporate governance system and enhance management health and transparency.

1.Board of Directors
The Company’s Board of Directors is composed of seven directors, including three from outside the company. The Board of Directors decides those matters set forth in laws and ordinances and important management matters, and exercises oversight of the director’s performance. In order to pass informed judgment in a timely fashion on the course of business, the directors attend a liaison meeting with the division heads and above every morning to confirm that tasks are carried out, even if there are no agenda items for the board. Important matters are discussed at meetings of the board of directors and decisions are taken.

3.Executive Officer System
In order to speed up decision making and strengthen oversight functions, the company introduced an executive officer system in April 2002 that eliminated the conflict of the same individual being responsible for both executive and oversight functions. This was a means of strengthening the function of the director.

5.Liaison Council and Management Meetings
The company has adopted a system in which the business situation and issues in each business unit are discussed and shared horizontally across the entire company at a liaison council meeting held each morning. It is attended by business unit heads and above. In addition, extra management meetings are held as necessary at which policies and plans for overall execution of management activities are proposed in addition to investigations, studies, management, notifications, and coordination.

Assessment of Effectiveness of Board of Directors
In order to verify on a regular basis that the board of directors is playing its role effectively and functioning properly, and to develop suitable measures for addressing problems and reinforcing strengths, the company conducts surveys of the effectiveness of the entire board of directors for each director and reports the analysis and results of the assessment to the board of directors. As a result of this analysis, the company’s board of directors has confirmed the effectiveness of the oversight of business processes and recognition of important management matters. Meanwhile, the Company has recognized issues including (i) encouraging discussion about how to deal with stakeholders other than shareholders and (ii) encouraging discussion about growth strategies for enhancing corporate value in the medium to long term. Moving forward, in addition to resolving these issues we will continue to enhance corporate governance to improve sustained corporate value by further improving the function of the board of directors and reinvigorating the board’s momentum.

2. In addition to the above, the 37th General Meeting of Shareholders held on March 29, 2012 resolved to grant annual stock options worth 50 million yen maximum

3. The shareholders’ meeting has resolved to abolish the system of retirement benefits for directors (and other officers) at the close of the 37th General Meeting of Shareholders held on March 29, 2011 and pay to each Director who would remain in office after the close of the General Meeting of Shareholders retirement benefits for directors for the period in office up to the abolition of the system when they retire.