NDIR CO2 sensor uses the principle that the gas to be measured absorbs infrared rays in a specific wavelength range, and the degree of absorption depends on the concentration. NDIR is an abbreviation for Non-Dispersive InfraRed.
Infrared rays emitted from the light source are measured by an infrared detector after passing through the gas. The amount of infrared light received by the infrared detector changes when light is absorbed by gas.
The infrared detector is equipped with an optical filter that removes infrared rays of wavelengths that are not needed for measurement, and by measuring only infrared rays in a specific wavelength range, interference other than the target gas is minimized.
NDIR CO2 sensor is measuring the wavelength of both the sample (target wavelength) and the reference (non-target wavelength). By knowing the change of the reference and the difference of these light amounts, the change of the light amount due to the aging and dirt of the light source and the detector is canceled, and stable measurement is realized for a long period of time without periodic calibration.

In case of CO2 molecules, it has the property of selectively absorbing infrared rays with a wavelength of 4.26μm. When the CO2 concentration is high, the attenuation of the incident light is large, and when the CO2 concentration is low, the attenuation is small.
The amount of infrared energy absorbed is determined by the CO2 gas concentration and the length of the measurement cell. This is called Lambert-Beer law, and the detector output and concentration have an exponential relationship.
NiCeRa NDIR CO2 sensor consists of an infrared light source, a sample cell, an optical filter, and an infrared detector.
The optical filter has a 2-channel structure. One is the sample wavelength in the band of infrared rays emitted from the light source that is absorbed by CO2, and the other is the reference wavelength that is not affected by CO2 and other miscellaneous gases. Since the infrared absorption amount itself is measured by the absorption ratio, stable measurement can be continuously achieved while compensating for the effects of aging of the light source.

There is a certain relationship (Lambert-Beer law) between the concentration of a medium and the rate at which light is absorbed by the medium. When light passes through a uniform medium, the amount of decrease in the intensity of the transmitted light is proportional to the intensity of the light and the thickness of the medium (optical path length) (Lambert’s law). If the medium is a solution, the amount of light absorbed is proportional to the concentration of the solution if the mediums are of equal thickness (Beer’s law). These are expressed by the following equations. 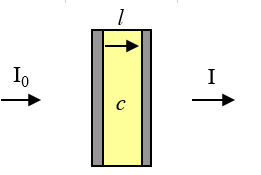 When the concentration “c” of the solution is expressed in M (mol/liter) and the optical path length “l” is expressed in cm, “ε” is called the molecular absorption coefficient, and the unit is M-1cm-1.
I/I0(%) is called transmittance “T”.

2-wavelength Thermopile Infrared Sensor Type (NiCeRa NDIR CO2 Sensor)
The method of detecting two wavelengths for measurement and reference is adopted. With these, changes in characteristics due to aging etc. are compensated. Highly accurate measurement is possible for a long period of time without calibration.

Single Wavelength Thermopile Infrared Sensor Type (Other Companies’ System)
There is only one wavelength for measurement. Periodic calibration is required. In order to compensate it, a method is taken in which a relatively low concentration environment is regarded as a constant concentration and corrected automatically by software.

Alarm signal prompting ventilation is output when a certain CO2 concentration is reached.

When CO2 exceeds a certain concentration, outside air is introduced.

It is used for environmental monitors in greenhouses, detection of CO2 concentration in storages, etc., and control for maintaining the optimum environment for plant.